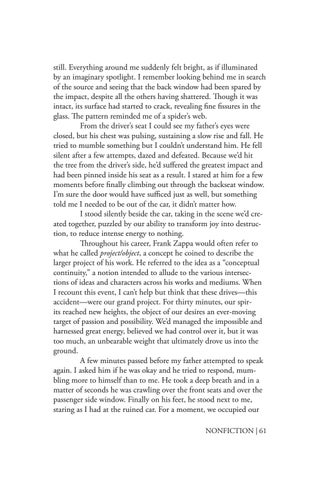 still. Everything around me suddenly felt bright, as if illuminated by an imaginary spotlight. I remember looking behind me in search of the source and seeing that the back window had been spared by the impact, despite all the others having shattered. Though it was intact, its surface had started to crack, revealing fine fissures in the glass. The pattern reminded me of a spider’s web. From the driver’s seat I could see my father’s eyes were closed, but his chest was pulsing, sustaining a slow rise and fall. He tried to mumble something but I couldn’t understand him. He fell silent after a few attempts, dazed and defeated. Because we’d hit the tree from the driver’s side, he’d suffered the greatest impact and had been pinned inside his seat as a result. I stared at him for a few moments before finally climbing out through the backseat window. I’m sure the door would have sufficed just as well, but something told me I needed to be out of the car, it didn’t matter how. I stood silently beside the car, taking in the scene we’d created together, puzzled by our ability to transform joy into destruction, to reduce intense energy to nothing. Throughout his career, Frank Zappa would often refer to what he called project/object, a concept he coined to describe the larger project of his work. He referred to the idea as a “conceptual continuity,” a notion intended to allude to the various intersections of ideas and characters across his works and mediums. When I recount this event, I can’t help but think that these drives—this accident—were our grand project. For thirty minutes, our spirits reached new heights, the object of our desires an ever-moving target of passion and possibility. We’d managed the impossible and harnessed great energy, believed we had control over it, but it was too much, an unbearable weight that ultimately drove us into the ground. A few minutes passed before my father attempted to speak again. I asked him if he was okay and he tried to respond, mumbling more to himself than to me. He took a deep breath and in a matter of seconds he was crawling over the front seats and over the passenger side window. Finally on his feet, he stood next to me, staring as I had at the ruined car. For a moment, we occupied our NONFICTION | 61