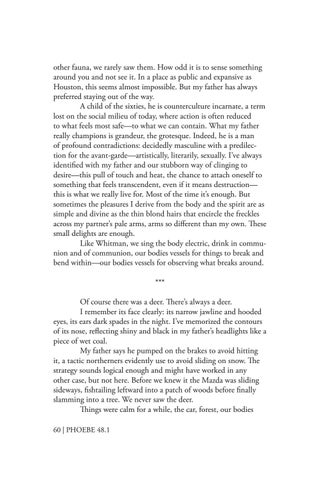 other fauna, we rarely saw them. How odd it is to sense something around you and not see it. In a place as public and expansive as Houston, this seems almost impossible. But my father has always preferred staying out of the way. A child of the sixties, he is counterculture incarnate, a term lost on the social milieu of today, where action is often reduced to what feels most safe—to what we can contain. What my father really champions is grandeur, the grotesque. Indeed, he is a man of profound contradictions: decidedly masculine with a predilection for the avant-garde—artistically, literarily, sexually. I’ve always identified with my father and our stubborn way of clinging to desire—this pull of touch and heat, the chance to attach oneself to something that feels transcendent, even if it means destruction— this is what we really live for. Most of the time it’s enough. But sometimes the pleasures I derive from the body and the spirit are as simple and divine as the thin blond hairs that encircle the freckles across my partner’s pale arms, arms so different than my own. These small delights are enough. Like Whitman, we sing the body electric, drink in communion and of communion, our bodies vessels for things to break and bend within—our bodies vessels for observing what breaks around. *** Of course there was a deer. There’s always a deer. I remember its face clearly: its narrow jawline and hooded eyes, its ears dark spades in the night. I’ve memorized the contours of its nose, reflecting shiny and black in my father’s headlights like a piece of wet coal. My father says he pumped on the brakes to avoid hitting it, a tactic northerners evidently use to avoid sliding on snow. The strategy sounds logical enough and might have worked in any other case, but not here. Before we knew it the Mazda was sliding sideways, fishtailing leftward into a patch of woods before finally slamming into a tree. We never saw the deer. Things were calm for a while, the car, forest, our bodies 60 | PHOEBE 48.1