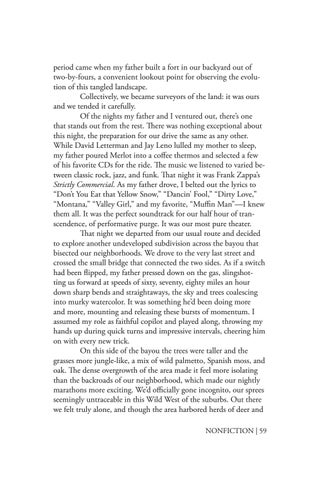 period came when my father built a fort in our backyard out of two-by-fours, a convenient lookout point for observing the evolution of this tangled landscape. Collectively, we became surveyors of the land: it was ours and we tended it carefully. Of the nights my father and I ventured out, there’s one that stands out from the rest. There was nothing exceptional about this night, the preparation for our drive the same as any other. While David Letterman and Jay Leno lulled my mother to sleep, my father poured Merlot into a coffee thermos and selected a few of his favorite CDs for the ride. The music we listened to varied between classic rock, jazz, and funk. That night it was Frank Zappa’s Strictly Commercial. As my father drove, I belted out the lyrics to “Don’t You Eat that Yellow Snow,” “Dancin’ Fool,” “Dirty Love,” “Montana,” “Valley Girl,” and my favorite, “Muffin Man”—I knew them all. It was the perfect soundtrack for our half hour of transcendence, of performative purge. It was our most pure theater. That night we departed from our usual route and decided to explore another undeveloped subdivision across the bayou that bisected our neighborhoods. We drove to the very last street and crossed the small bridge that connected the two sides. As if a switch had been flipped, my father pressed down on the gas, slingshotting us forward at speeds of sixty, seventy, eighty miles an hour down sharp bends and straightaways, the sky and trees coalescing into murky watercolor. It was something he’d been doing more and more, mounting and releasing these bursts of momentum. I assumed my role as faithful copilot and played along, throwing my hands up during quick turns and impressive intervals, cheering him on with every new trick. On this side of the bayou the trees were taller and the grasses more jungle-like, a mix of wild palmetto, Spanish moss, and oak. The dense overgrowth of the area made it feel more isolating than the backroads of our neighborhood, which made our nightly marathons more exciting. We’d officially gone incognito, our sprees seemingly untraceable in this Wild West of the suburbs. Out there we felt truly alone, and though the area harbored herds of deer and NONFICTION | 59