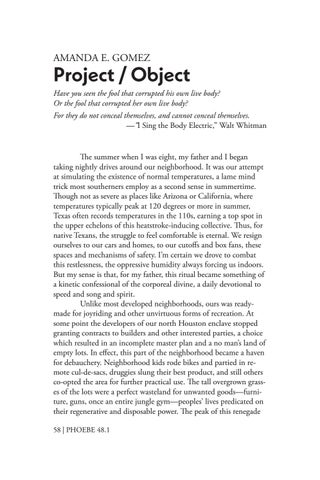 The summer when I was eight, my father and I began taking nightly drives around our neighborhood. It was our attempt at simulating the existence of normal temperatures, a lame mind trick most southerners employ as a second sense in summertime. Though not as severe as places like Arizona or California, where temperatures typically peak at 120 degrees or more in summer, Texas often records temperatures in the 110s, earning a top spot in the upper echelons of this heatstroke-inducing collective. Thus, for native Texans, the struggle to feel comfortable is eternal. We resign ourselves to our cars and homes, to our cutoffs and box fans, these spaces and mechanisms of safety. I’m certain we drove to combat this restlessness, the oppressive humidity always forcing us indoors. But my sense is that, for my father, this ritual became something of a kinetic confessional of the corporeal divine, a daily devotional to speed and song and spirit. Unlike most developed neighborhoods, ours was readymade for joyriding and other unvirtuous forms of recreation. At some point the developers of our north Houston enclave stopped granting contracts to builders and other interested parties, a choice which resulted in an incomplete master plan and a no man’s land of empty lots. In effect, this part of the neighborhood became a haven for debauchery. Neighborhood kids rode bikes and partied in remote cul-de-sacs, druggies slung their best product, and still others co-opted the area for further practical use. The tall overgrown grasses of the lots were a perfect wasteland for unwanted goods—furniture, guns, once an entire jungle gym—peoples’ lives predicated on their regenerative and disposable power. The peak of this renegade 58 | PHOEBE 48.1