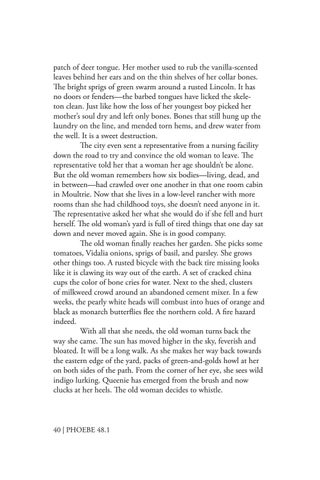 patch of deer tongue. Her mother used to rub the vanilla-scented leaves behind her ears and on the thin shelves of her collar bones. The bright sprigs of green swarm around a rusted Lincoln. It has no doors or fenders—the barbed tongues have licked the skeleton clean. Just like how the loss of her youngest boy picked her mother’s soul dry and left only bones. Bones that still hung up the laundry on the line, and mended torn hems, and drew water from the well. It is a sweet destruction. The city even sent a representative from a nursing facility down the road to try and convince the old woman to leave. The representative told her that a woman her age shouldn’t be alone. But the old woman remembers how six bodies—living, dead, and in between—had crawled over one another in that one room cabin in Moultrie. Now that she lives in a low-level rancher with more rooms than she had childhood toys, she doesn’t need anyone in it. The representative asked her what she would do if she fell and hurt herself. The old woman’s yard is full of tired things that one day sat down and never moved again. She is in good company. The old woman finally reaches her garden. She picks some tomatoes, Vidalia onions, sprigs of basil, and parsley. She grows other things too. A rusted bicycle with the back tire missing looks like it is clawing its way out of the earth. A set of cracked china cups the color of bone cries for water. Next to the shed, clusters of milkweed crowd around an abandoned cement mixer. In a few weeks, the pearly white heads will combust into hues of orange and black as monarch butterflies flee the northern cold. A fire hazard indeed. With all that she needs, the old woman turns back the way she came. The sun has moved higher in the sky, feverish and bloated. It will be a long walk. As she makes her way back towards the eastern edge of the yard, packs of green-and-golds howl at her on both sides of the path. From the corner of her eye, she sees wild indigo lurking. Queenie has emerged from the brush and now clucks at her heels. The old woman decides to whistle.