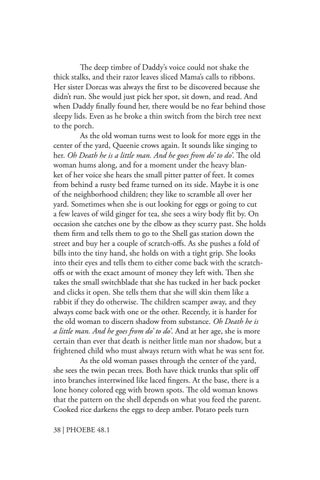 The deep timbre of Daddy’s voice could not shake the thick stalks, and their razor leaves sliced Mama’s calls to ribbons. Her sister Dorcas was always the first to be discovered because she didn’t run. She would just pick her spot, sit down, and read. And when Daddy finally found her, there would be no fear behind those sleepy lids. Even as he broke a thin switch from the birch tree next to the porch. As the old woman turns west to look for more eggs in the center of the yard, Queenie crows again. It sounds like singing to her. Oh Death he is a little man. And he goes from do’ to do’. The old woman hums along, and for a moment under the heavy blanket of her voice she hears the small pitter patter of feet. It comes from behind a rusty bed frame turned on its side. Maybe it is one of the neighborhood children; they like to scramble all over her yard. Sometimes when she is out looking for eggs or going to cut a few leaves of wild ginger for tea, she sees a wiry body flit by. On occasion she catches one by the elbow as they scurry past. She holds them firm and tells them to go to the Shell gas station down the street and buy her a couple of scratch-offs. As she pushes a fold of bills into the tiny hand, she holds on with a tight grip. She looks into their eyes and tells them to either come back with the scratchoffs or with the exact amount of money they left with. Then she takes the small switchblade that she has tucked in her back pocket and clicks it open. She tells them that she will skin them like a rabbit if they do otherwise. The children scamper away, and they always come back with one or the other. Recently, it is harder for the old woman to discern shadow from substance. Oh Death he is a little man. And he goes from do’ to do’. And at her age, she is more certain than ever that death is neither little man nor shadow, but a frightened child who must always return with what he was sent for. As the old woman passes through the center of the yard, she sees the twin pecan trees. Both have thick trunks that split off into branches intertwined like laced fingers. At the base, there is a lone honey colored egg with brown spots. The old woman knows that the pattern on the shell depends on what you feed the parent. Cooked rice darkens the eggs to deep amber. Potato peels turn 38 | PHOEBE 48.1