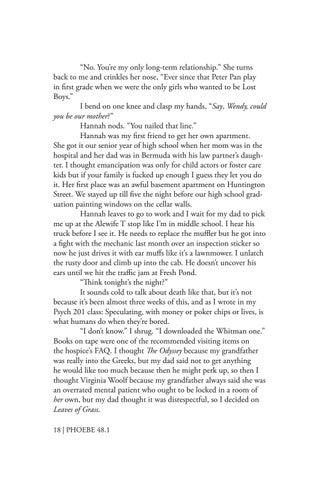 “No. You’re my only long-term relationship.” She turns back to me and crinkles her nose, “Ever since that Peter Pan play in first grade when we were the only girls who wanted to be Lost Boys.” I bend on one knee and clasp my hands, “Say, Wendy, could you be our mother?” Hannah nods. “You nailed that line.” Hannah was my first friend to get her own apartment. She got it our senior year of high school when her mom was in the hospital and her dad was in Bermuda with his law partner’s daughter. I thought emancipation was only for child actors or foster care kids but if your family is fucked up enough I guess they let you do it. Her first place was an awful basement apartment on Huntington Street. We stayed up till five the night before our high school graduation painting windows on the cellar walls. Hannah leaves to go to work and I wait for my dad to pick me up at the Alewife T stop like I’m in middle school. I hear his truck before I see it. He needs to replace the muffler but he got into a fight with the mechanic last month over an inspection sticker so now he just drives it with ear muffs like it’s a lawnmower. I unlatch the rusty door and climb up into the cab. He doesn’t uncover his ears until we hit the traffic jam at Fresh Pond. “Think tonight’s the night?” It sounds cold to talk about death like that, but it’s not because it’s been almost three weeks of this, and as I wrote in my Psych 201 class: Speculating, with money or poker chips or lives, is what humans do when they’re bored. “I don’t know.” I shrug. “I downloaded the Whitman one.” Books on tape were one of the recommended visiting items on the hospice’s FAQ. I thought The Odyssey because my grandfather was really into the Greeks, but my dad said not to get anything he would like too much because then he might perk up, so then I thought Virginia Woolf because my grandfather always said she was an overrated mental patient who ought to be locked in a room of her own, but my dad thought it was disrespectful, so I decided on Leaves of Grass. 18 | PHOEBE 48.1