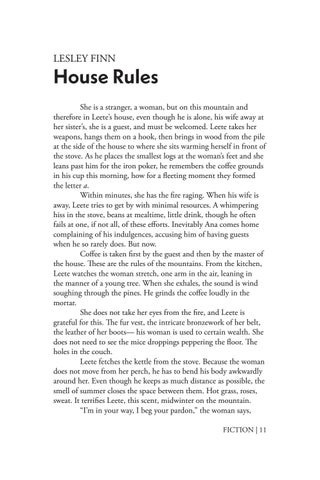 House Rules She is a stranger, a woman, but on this mountain and therefore in Leete’s house, even though he is alone, his wife away at her sister’s, she is a guest, and must be welcomed. Leete takes her weapons, hangs them on a hook, then brings in wood from the pile at the side of the house to where she sits warming herself in front of the stove. As he places the smallest logs at the woman’s feet and she leans past him for the iron poker, he remembers the coffee grounds in his cup this morning, how for a fleeting moment they formed the letter a. Within minutes, she has the fire raging. When his wife is away, Leete tries to get by with minimal resources. A whimpering hiss in the stove, beans at mealtime, little drink, though he often fails at one, if not all, of these efforts. Inevitably Ana comes home complaining of his indulgences, accusing him of having guests when he so rarely does. But now. Coffee is taken first by the guest and then by the master of the house. These are the rules of the mountains. From the kitchen, Leete watches the woman stretch, one arm in the air, leaning in the manner of a young tree. When she exhales, the sound is wind soughing through the pines. He grinds the coffee loudly in the mortar. She does not take her eyes from the fire, and Leete is grateful for this. The fur vest, the intricate bronzework of her belt, the leather of her boots— his woman is used to certain wealth. She does not need to see the mice droppings peppering the floor. The holes in the couch. Leete fetches the kettle from the stove. Because the woman does not move from her perch, he has to bend his body awkwardly around her. Even though he keeps as much distance as possible, the smell of summer closes the space between them. Hot grass, roses, sweat. It terrifies Leete, this scent, midwinter on the mountain. “I’m in your way, I beg your pardon,” the woman says, FICTION | 11