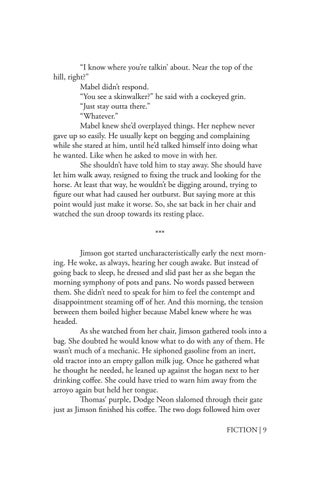 “I know where you’re talkin’ about. Near the top of the hill, right?” Mabel didn’t respond. “You see a skinwalker?” he said with a cockeyed grin. “Just stay outta there.” “Whatever.” Mabel knew she’d overplayed things. Her nephew never gave up so easily. He usually kept on begging and complaining while she stared at him, until he’d talked himself into doing what he wanted. Like when he asked to move in with her. She shouldn’t have told him to stay away. She should have let him walk away, resigned to fixing the truck and looking for the horse. At least that way, he wouldn’t be digging around, trying to figure out what had caused her outburst. But saying more at this point would just make it worse. So, she sat back in her chair and watched the sun droop towards its resting place. *** Jimson got started uncharacteristically early the next morning. He woke, as always, hearing her cough awake. But instead of going back to sleep, he dressed and slid past her as she began the morning symphony of pots and pans. No words passed between them. She didn’t need to speak for him to feel the contempt and disappointment steaming off of her. And this morning, the tension between them boiled higher because Mabel knew where he was headed. As she watched from her chair, Jimson gathered tools into a bag. She doubted he would know what to do with any of them. He wasn’t much of a mechanic. He siphoned gasoline from an inert, old tractor into an empty gallon milk jug. Once he gathered what he thought he needed, he leaned up against the hogan next to her drinking coffee. She could have tried to warn him away from the arroyo again but held her tongue. Thomas’ purple, Dodge Neon slalomed through their gate just as Jimson finished his coffee. The two dogs followed him over FICTION | 9