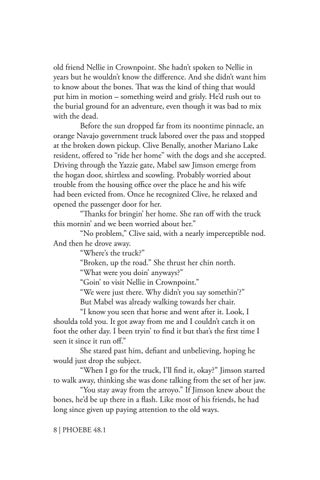 old friend Nellie in Crownpoint. She hadn’t spoken to Nellie in years but he wouldn’t know the difference. And she didn’t want him to know about the bones. That was the kind of thing that would put him in motion – something weird and grisly. He’d rush out to the burial ground for an adventure, even though it was bad to mix with the dead. Before the sun dropped far from its noontime pinnacle, an orange Navajo government truck labored over the pass and stopped at the broken down pickup. Clive Benally, another Mariano Lake resident, offered to “ride her home” with the dogs and she accepted. Driving through the Yazzie gate, Mabel saw Jimson emerge from the hogan door, shirtless and scowling. Probably worried about trouble from the housing office over the place he and his wife had been evicted from. Once he recognized Clive, he relaxed and opened the passenger door for her. “Thanks for bringin’ her home. She ran off with the truck this mornin’ and we been worried about her.” “No problem,” Clive said, with a nearly imperceptible nod. And then he drove away. “Where’s the truck?” “Broken, up the road.” She thrust her chin north. “What were you doin’ anyways?” “Goin’ to visit Nellie in Crownpoint.” “We were just there. Why didn’t you say somethin’?” But Mabel was already walking towards her chair. “I know you seen that horse and went after it. Look, I shoulda told you. It got away from me and I couldn’t catch it on foot the other day. I been tryin’ to find it but that’s the first time I seen it since it run off.” She stared past him, defiant and unbelieving, hoping he would just drop the subject. “When I go for the truck, I’ll find it, okay?” Jimson started to walk away, thinking she was done talking from the set of her jaw. “You stay away from the arroyo.” If Jimson knew about the bones, he’d be up there in a flash. Like most of his friends, he had long since given up paying attention to the old ways. 8 | PHOEBE 48.1