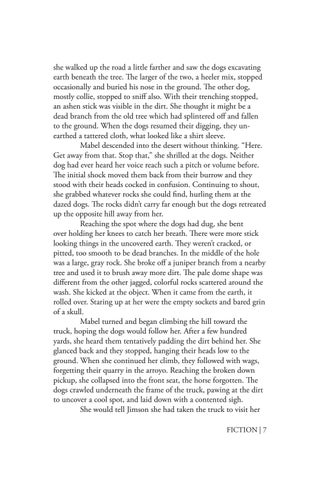 she walked up the road a little farther and saw the dogs excavating earth beneath the tree. The larger of the two, a heeler mix, stopped occasionally and buried his nose in the ground. The other dog, mostly collie, stopped to sniff also. With their trenching stopped, an ashen stick was visible in the dirt. She thought it might be a dead branch from the old tree which had splintered off and fallen to the ground. When the dogs resumed their digging, they unearthed a tattered cloth, what looked like a shirt sleeve. Mabel descended into the desert without thinking. “Here. Get away from that. Stop that,” she shrilled at the dogs. Neither dog had ever heard her voice reach such a pitch or volume before. The initial shock moved them back from their burrow and they stood with their heads cocked in confusion. Continuing to shout, she grabbed whatever rocks she could find, hurling them at the dazed dogs. The rocks didn’t carry far enough but the dogs retreated up the opposite hill away from her. Reaching the spot where the dogs had dug, she bent over holding her knees to catch her breath. There were more stick looking things in the uncovered earth. They weren’t cracked, or pitted, too smooth to be dead branches. In the middle of the hole was a large, gray rock. She broke off a juniper branch from a nearby tree and used it to brush away more dirt. The pale dome shape was different from the other jagged, colorful rocks scattered around the wash. She kicked at the object. When it came from the earth, it rolled over. Staring up at her were the empty sockets and bared grin of a skull. Mabel turned and began climbing the hill toward the truck, hoping the dogs would follow her. After a few hundred yards, she heard them tentatively padding the dirt behind her. She glanced back and they stopped, hanging their heads low to the ground. When she continued her climb, they followed with wags, forgetting their quarry in the arroyo. Reaching the broken down pickup, she collapsed into the front seat, the horse forgotten. The dogs crawled underneath the frame of the truck, pawing at the dirt to uncover a cool spot, and laid down with a contented sigh. She would tell Jimson she had taken the truck to visit her FICTION | 7