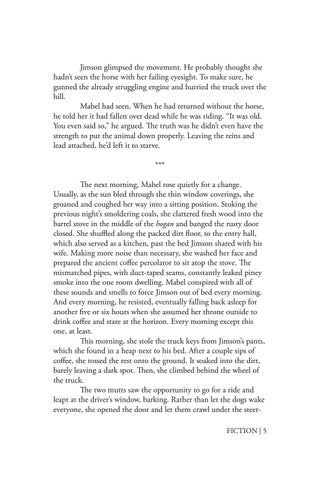 Jimson glimpsed the movement. He probably thought she hadn’t seen the horse with her failing eyesight. To make sure, he gunned the already struggling engine and hurried the truck over the hill. Mabel had seen. When he had returned without the horse, he told her it had fallen over dead while he was riding. “It was old. You even said so,” he argued. The truth was he didn’t even have the strength to put the animal down properly. Leaving the reins and lead attached, he’d left it to starve. *** The next morning, Mabel rose quietly for a change. Usually, as the sun bled through the thin window coverings, she groaned and coughed her way into a sitting position. Stoking the previous night’s smoldering coals, she clattered fresh wood into the barrel stove in the middle of the hogan and banged the rusty door closed. She shuffled along the packed dirt floor, to the entry hall, which also served as a kitchen, past the bed Jimson shared with his wife. Making more noise than necessary, she washed her face and prepared the ancient coffee percolator to sit atop the stove. The mismatched pipes, with duct-taped seams, constantly leaked piney smoke into the one room dwelling. Mabel conspired with all of these sounds and smells to force Jimson out of bed every morning. And every morning, he resisted, eventually falling back asleep for another five or six hours when she assumed her throne outside to drink coffee and stare at the horizon. Every morning except this one, at least. This morning, she stole the truck keys from Jimson’s pants, which she found in a heap next to his bed. After a couple sips of coffee, she tossed the rest onto the ground. It soaked into the dirt, barely leaving a dark spot. Then, she climbed behind the wheel of the truck. The two mutts saw the opportunity to go for a ride and leapt at the driver’s window, barking. Rather than let the dogs wake everyone, she opened the door and let them crawl under the steerFICTION | 5