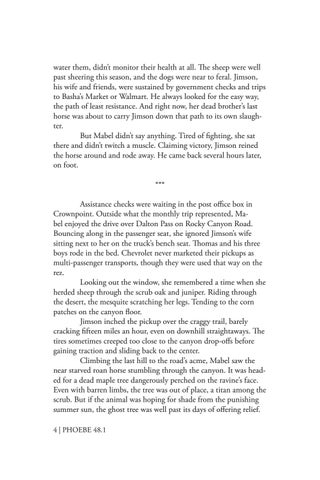 water them, didn’t monitor their health at all. The sheep were well past sheering this season, and the dogs were near to feral. Jimson, his wife and friends, were sustained by government checks and trips to Basha’s Market or Walmart. He always looked for the easy way, the path of least resistance. And right now, her dead brother’s last horse was about to carry Jimson down that path to its own slaughter. But Mabel didn’t say anything. Tired of fighting, she sat there and didn’t twitch a muscle. Claiming victory, Jimson reined the horse around and rode away. He came back several hours later, on foot. *** Assistance checks were waiting in the post office box in Crownpoint. Outside what the monthly trip represented, Mabel enjoyed the drive over Dalton Pass on Rocky Canyon Road. Bouncing along in the passenger seat, she ignored Jimson’s wife sitting next to her on the truck’s bench seat. Thomas and his three boys rode in the bed. Chevrolet never marketed their pickups as multi-passenger transports, though they were used that way on the rez. Looking out the window, she remembered a time when she herded sheep through the scrub oak and juniper. Riding through the desert, the mesquite scratching her legs. Tending to the corn patches on the canyon floor. Jimson inched the pickup over the craggy trail, barely cracking fifteen miles an hour, even on downhill straightaways. The tires sometimes creeped too close to the canyon drop-offs before gaining traction and sliding back to the center. Climbing the last hill to the road’s acme, Mabel saw the near starved roan horse stumbling through the canyon. It was headed for a dead maple tree dangerously perched on the ravine’s face. Even with barren limbs, the tree was out of place, a titan among the scrub. But if the animal was hoping for shade from the punishing summer sun, the ghost tree was well past its days of offering relief. 4 | PHOEBE 48.1