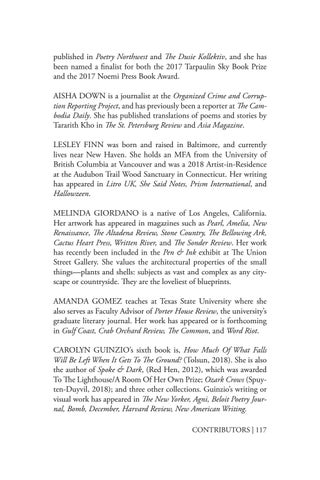 published in Poetry Northwest and The Dusie Kollektiv, and she has been named a finalist for both the 2017 Tarpaulin Sky Book Prize and the 2017 Noemi Press Book Award. AISHA DOWN is a journalist at the Organized Crime and Corruption Reporting Project, and has previously been a reporter at The Cambodia Daily. She has published translations of poems and stories by Tararith Kho in The St. Petersburg Review and Asia Magazine. LESLEY FINN was born and raised in Baltimore, and currently lives near New Haven. She holds an MFA from the University of British Columbia at Vancouver and was a 2018 Artist-in-Residence at the Audubon Trail Wood Sanctuary in Connecticut. Her writing has appeared in Litro UK, She Said Notes, Prism International, and Hallowzeen. MELINDA GIORDANO is a native of Los Angeles, California. Her artwork has appeared in magazines such as Pearl, Amelia, New Renaissance, The Altadena Review, Stone Country, The Bellowing Ark, Cactus Heart Press, Written River, and The Sonder Review. Her work has recently been included in the Pen &amp; Ink exhibit at The Union Street Gallery. She values the architectural properties of the small things—plants and shells: subjects as vast and complex as any cityscape or countryside. They are the loveliest of blueprints. AMANDA GOMEZ teaches at Texas State University where she also serves as Faculty Advisor of Porter House Review, the university’s graduate literary journal. Her work has appeared or is forthcoming in Gulf Coast, Crab Orchard Review, The Common, and Word Riot. CAROLYN GUINZIO’s sixth book is, How Much Of What Falls Will Be Left When It Gets To The Ground? (Tolsun, 2018). She is also the author of Spoke &amp; Dark, (Red Hen, 2012), which was awarded To The Lighthouse/A Room Of Her Own Prize; Ozark Crows (Spuyten-Duyvil, 2018); and three other collections. Guinzio’s writing or visual work has appeared in The New Yorker, Agni, Beloit Poetry Journal, Bomb, December, Harvard Review, New American Writing. CONTRIBUTORS | 117