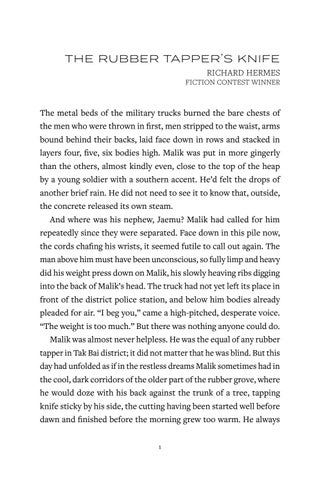 The metal beds of the military trucks burned the bare chests of the men who were thrown in first, men stripped to the waist, arms bound behind their backs, laid face down in rows and stacked in layers four, five, six bodies high. Malik was put in more gingerly than the others, almost kindly even, close to the top of the heap by a young soldier with a southern accent. He’d felt the drops of another brief rain. He did not need to see it to know that, outside, the concrete released its own steam. And where was his nephew, Jaemu? Malik had called for him repeatedly since they were separated. Face down in this pile now, the cords chafing his wrists, it seemed futile to call out again. The man above him must have been unconscious, so fully limp and heavy did his weight press down on Malik, his slowly heaving ribs digging into the back of Malik’s head. The truck had not yet left its place in front of the district police station, and below him bodies already pleaded for air. “I beg you,” came a high-pitched, desperate voice. “The weight is too much.” But there was nothing anyone could do. Malik was almost never helpless. He was the equal of any rubber tapper in Tak Bai district; it did not matter that he was blind. But this day had unfolded as if in the restless dreams Malik sometimes had in the cool, dark corridors of the older part of the rubber grove, where he would doze with his back against the trunk of a tree, tapping knife sticky by his side, the cutting having been started well before dawn and finished before the morning grew too warm. He always 1