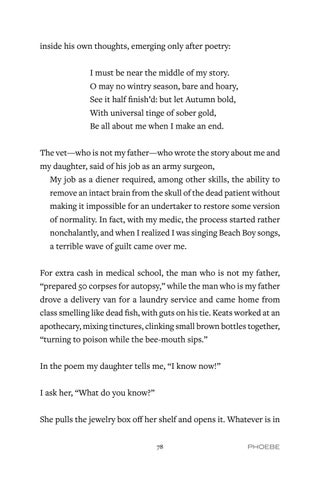 inside his own thoughts, emerging only after poetry: I must be near the middle of my story. O may no wintry season, bare and hoary, See it half finish’d: but let Autumn bold, With universal tinge of sober gold, Be all about me when I make an end. The vet—who is not my father—who wrote the story about me and my daughter, said of his job as an army surgeon, My job as a diener required, among other skills, the ability to remove an intact brain from the skull of the dead patient without making it impossible for an undertaker to restore some version of normality. In fact, with my medic, the process started rather nonchalantly, and when I realized I was singing Beach Boy songs, a terrible wave of guilt came over me. For extra cash in medical school, the man who is not my father, “prepared 50 corpses for autopsy,” while the man who is my father drove a delivery van for a laundry service and came home from class smelling like dead fish, with guts on his tie. Keats worked at an apothecary, mixing tinctures, clinking small brown bottles together, “turning to poison while the bee-mouth sips.” In the poem my daughter tells me, “I know now!” I ask her, “What do you know?” She pulls the jewelry box off her shelf and opens it. Whatever is in 78