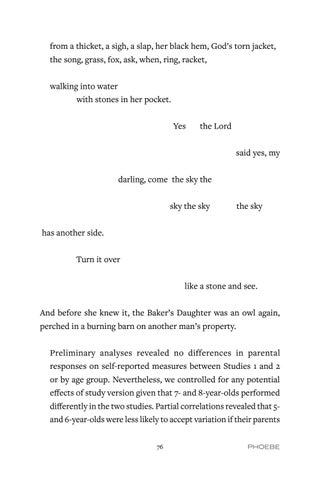 from a thicket, a sigh, a slap, her black hem, God’s torn jacket, the song, grass, fox, ask, when, ring, racket, walking into water with stones in her pocket. Yes the Lord     said yes, my        darling, come the sky the sky the sky

has another side.          Turn it over   like a stone and see. And before she knew it, the Baker’s Daughter was an owl again, perched in a burning barn on another man’s property. Preliminary analyses revealed no differences in parental responses on self-reported measures between Studies 1 and 2 or by age group. Nevertheless, we controlled for any potential effects of study version given that 7- and 8-year-olds performed differently in the two studies. Partial correlations revealed that 5and 6-year-olds were less likely to accept variation if their parents 76