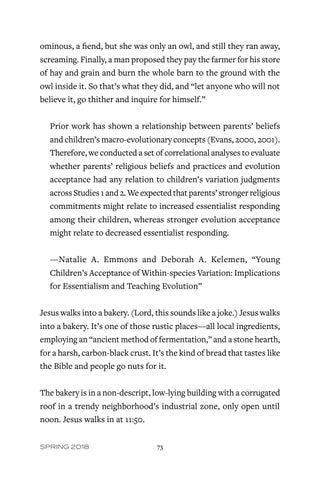 ominous, a fiend, but she was only an owl, and still they ran away, screaming. Finally, a man proposed they pay the farmer for his store of hay and grain and burn the whole barn to the ground with the owl inside it. So that’s what they did, and “let anyone who will not believe it, go thither and inquire for himself.” Prior work has shown a relationship between parents’ beliefs and children’s macro-evolutionary concepts (Evans, 2000, 2001). Therefore, we conducted a set of correlational analyses to evaluate whether parents’ religious beliefs and practices and evolution acceptance had any relation to children’s variation judgments across Studies 1 and 2. We expected that parents’ stronger religious commitments might relate to increased essentialist responding among their children, whereas stronger evolution acceptance might relate to decreased essentialist responding. —Natalie A. Emmons and Deborah A. Kelemen, “Young Children’s Acceptance of Within-species Variation: Implications for Essentialism and Teaching Evolution” Jesus walks into a bakery. (Lord, this sounds like a joke.) Jesus walks into a bakery. It’s one of those rustic places—all local ingredients, employing an “ancient method of fermentation,” and a stone hearth, for a harsh, carbon-black crust. It’s the kind of bread that tastes like the Bible and people go nuts for it. The bakery is in a non-descript, low-lying building with a corrugated roof in a trendy neighborhood’s industrial zone, only open until noon. Jesus walks in at 11:50. SPRING 2018