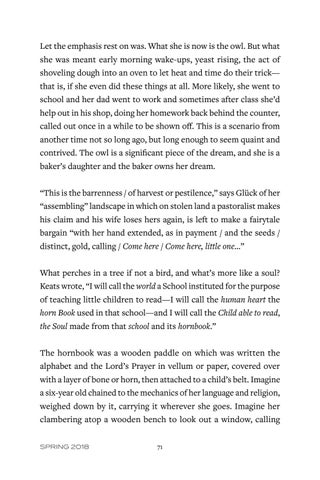 Let the emphasis rest on was. What she is now is the owl. But what she was meant early morning wake-ups, yeast rising, the act of shoveling dough into an oven to let heat and time do their trick— that is, if she even did these things at all. More likely, she went to school and her dad went to work and sometimes after class she’d help out in his shop, doing her homework back behind the counter, called out once in a while to be shown off. This is a scenario from another time not so long ago, but long enough to seem quaint and contrived. The owl is a significant piece of the dream, and she is a baker’s daughter and the baker owns her dream. “This is the barrenness / of harvest or pestilence,” says Glück of her “assembling” landscape in which on stolen land a pastoralist makes his claim and his wife loses hers again, is left to make a fairytale bargain “with her hand extended, as in payment / and the seeds / distinct, gold, calling / Come here / Come here, little one…” What perches in a tree if not a bird, and what’s more like a soul? Keats wrote, “I will call the world a School instituted for the purpose of teaching little children to read—I will call the human heart the horn Book used in that school—and I will call the Child able to read, the Soul made from that school and its hornbook.” The hornbook was a wooden paddle on which was written the alphabet and the Lord’s Prayer in vellum or paper, covered over with a layer of bone or horn, then attached to a child’s belt. Imagine a six-year old chained to the mechanics of her language and religion, weighed down by it, carrying it wherever she goes. Imagine her clambering atop a wooden bench to look out a window, calling SPRING 2018