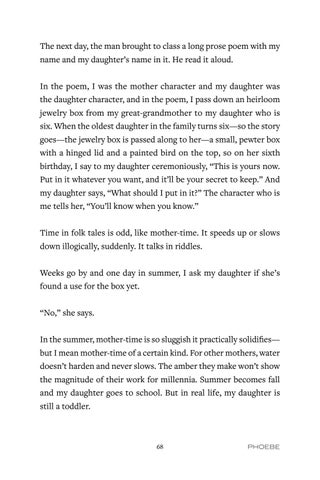 The next day, the man brought to class a long prose poem with my name and my daughter’s name in it. He read it aloud. In the poem, I was the mother character and my daughter was the daughter character, and in the poem, I pass down an heirloom jewelry box from my great-grandmother to my daughter who is six. When the oldest daughter in the family turns six—so the story goes—the jewelry box is passed along to her—a small, pewter box with a hinged lid and a painted bird on the top, so on her sixth birthday, I say to my daughter ceremoniously, “This is yours now. Put in it whatever you want, and it’ll be your secret to keep.” And my daughter says, “What should I put in it?” The character who is me tells her, “You’ll know when you know.” Time in folk tales is odd, like mother-time. It speeds up or slows down illogically, suddenly. It talks in riddles. Weeks go by and one day in summer, I ask my daughter if she’s found a use for the box yet. “No,” she says. In the summer, mother-time is so sluggish it practically solidifies— but I mean mother-time of a certain kind. For other mothers, water doesn’t harden and never slows. The amber they make won’t show the magnitude of their work for millennia. Summer becomes fall and my daughter goes to school. But in real life, my daughter is still a toddler.