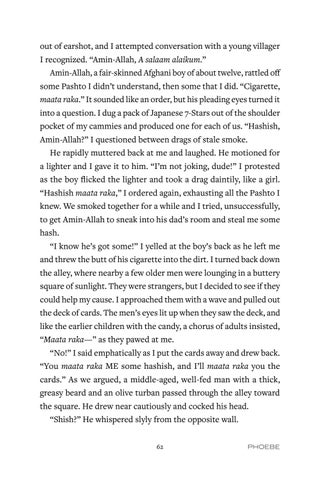 out of earshot, and I attempted conversation with a young villager I recognized. “Amin-Allah, A salaam alaikum.” Amin-Allah, a fair-skinned Afghani boy of about twelve, rattled off some Pashto I didn’t understand, then some that I did. “Cigarette, maata raka.” It sounded like an order, but his pleading eyes turned it into a question. I dug a pack of Japanese 7-Stars out of the shoulder pocket of my cammies and produced one for each of us. “Hashish, Amin-Allah?” I questioned between drags of stale smoke. He rapidly muttered back at me and laughed. He motioned for a lighter and I gave it to him. “I’m not joking, dude!” I protested as the boy flicked the lighter and took a drag daintily, like a girl. “Hashish maata raka,” I ordered again, exhausting all the Pashto I knew. We smoked together for a while and I tried, unsuccessfully, to get Amin-Allah to sneak into his dad’s room and steal me some hash. “I know he’s got some!” I yelled at the boy’s back as he left me and threw the butt of his cigarette into the dirt. I turned back down the alley, where nearby a few older men were lounging in a buttery square of sunlight. They were strangers, but I decided to see if they could help my cause. I approached them with a wave and pulled out the deck of cards. The men’s eyes lit up when they saw the deck, and like the earlier children with the candy, a chorus of adults insisted, “Maata raka—” as they pawed at me. “No!” I said emphatically as I put the cards away and drew back. “You maata raka ME some hashish, and I’ll maata raka you the cards.” As we argued, a middle-aged, well-fed man with a thick, greasy beard and an olive turban passed through the alley toward the square. He drew near cautiously and cocked his head. “Shish?” He whispered slyly from the opposite wall. 62