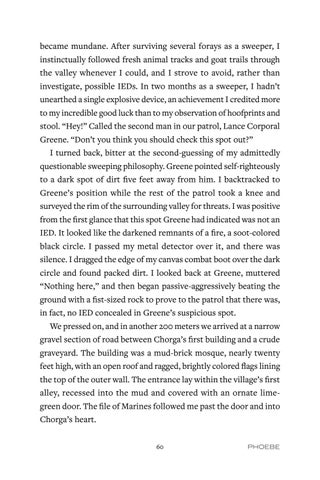 became mundane. After surviving several forays as a sweeper, I instinctually followed fresh animal tracks and goat trails through the valley whenever I could, and I strove to avoid, rather than investigate, possible IEDs. In two months as a sweeper, I hadn’t unearthed a single explosive device, an achievement I credited more to my incredible good luck than to my observation of hoofprints and stool. “Hey!” Called the second man in our patrol, Lance Corporal Greene. “Don’t you think you should check this spot out?” I turned back, bitter at the second-guessing of my admittedly questionable sweeping philosophy. Greene pointed self-righteously to a dark spot of dirt five feet away from him. I backtracked to Greene’s position while the rest of the patrol took a knee and surveyed the rim of the surrounding valley for threats. I was positive from the first glance that this spot Greene had indicated was not an IED. It looked like the darkened remnants of a fire, a soot-colored black circle. I passed my metal detector over it, and there was silence. I dragged the edge of my canvas combat boot over the dark circle and found packed dirt. I looked back at Greene, muttered “Nothing here,” and then began passive-aggressively beating the ground with a fist-sized rock to prove to the patrol that there was, in fact, no IED concealed in Greene’s suspicious spot. We pressed on, and in another 200 meters we arrived at a narrow gravel section of road between Chorga’s first building and a crude graveyard. The building was a mud-brick mosque, nearly twenty feet high, with an open roof and ragged, brightly colored flags lining the top of the outer wall. The entrance lay within the village’s first alley, recessed into the mud and covered with an ornate limegreen door. The file of Marines followed me past the door and into Chorga’s heart. 60