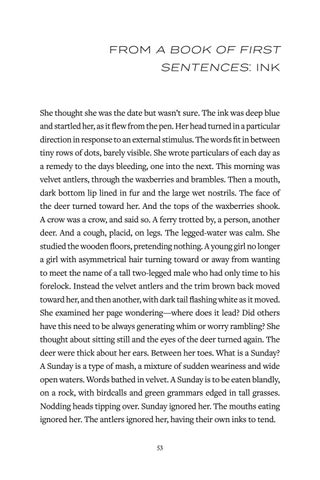 from A Book of First Sentences: INK

She thought she was the date but wasnâ&amp;#x20AC;&amp;#x2122;t sure. The ink was deep blue and startled her, as it flew from the pen. Her head turned in a particular direction in response to an external stimulus. The words fit in between tiny rows of dots, barely visible. She wrote particulars of each day as a remedy to the days bleeding, one into the next. This morning was velvet antlers, through the waxberries and brambles. Then a mouth, dark bottom lip lined in fur and the large wet nostrils. The face of the deer turned toward her. And the tops of the waxberries shook. A crow was a crow, and said so. A ferry trotted by, a person, another deer. And a cough, placid, on legs. The legged-water was calm. She studied the wooden floors, pretending nothing. A young girl no longer a girl with asymmetrical hair turning toward or away from wanting to meet the name of a tall two-legged male who had only time to his forelock. Instead the velvet antlers and the trim brown back moved toward her, and then another, with dark tail flashing white as it moved. She examined her page wonderingâ&amp;#x20AC;&amp;#x201D;where does it lead? Did others have this need to be always generating whim or worry rambling? She thought about sitting still and the eyes of the deer turned again. The deer were thick about her ears. Between her toes. What is a Sunday? A Sunday is a type of mash, a mixture of sudden weariness and wide open waters. Words bathed in velvet. A Sunday is to be eaten blandly, on a rock, with birdcalls and green grammars edged in tall grasses. Nodding heads tipping over. Sunday ignored her. The mouths eating ignored her. The antlers ignored her, having their own inks to tend. 53