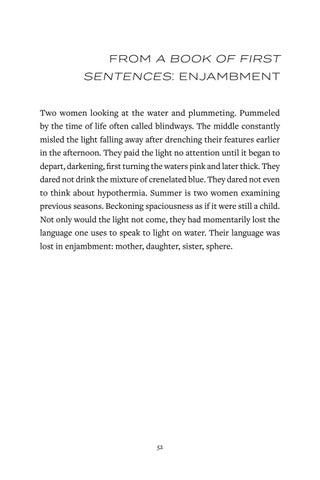 from A Book of First Sentences: eNJAMBMENT Two women looking at the water and plummeting. Pummeled by the time of life often called blindways. The middle constantly misled the light falling away after drenching their features earlier in the afternoon. They paid the light no attention until it began to depart, darkening, first turning the waters pink and later thick. They dared not drink the mixture of crenelated blue. They dared not even to think about hypothermia. Summer is two women examining previous seasons. Beckoning spaciousness as if it were still a child. Not only would the light not come, they had momentarily lost the language one uses to speak to light on water. Their language was lost in enjambment: mother, daughter, sister, sphere.