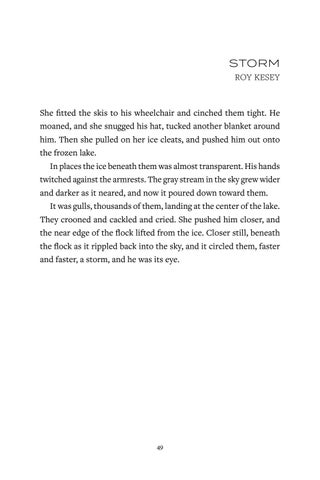 She fitted the skis to his wheelchair and cinched them tight. He moaned, and she snugged his hat, tucked another blanket around him. Then she pulled on her ice cleats, and pushed him out onto the frozen lake. In places the ice beneath them was almost transparent. His hands twitched against the armrests. The gray stream in the sky grew wider and darker as it neared, and now it poured down toward them. It was gulls, thousands of them, landing at the center of the lake. They crooned and cackled and cried. She pushed him closer, and the near edge of the flock lifted from the ice. Closer still, beneath the flock as it rippled back into the sky, and it circled them, faster and faster, a storm, and he was its eye.