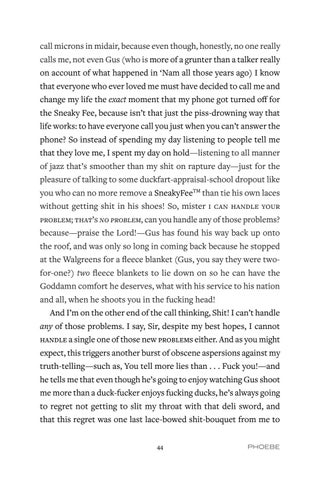 call microns in midair, because even though, honestly, no one really calls me, not even Gus (who is more of a grunter than a talker really on account of what happened in ‘Nam all those years ago) I know that everyone who ever loved me must have decided to call me and change my life the exact moment that my phone got turned off for the Sneaky Fee, because isn’t that just the piss-drowning way that life works: to have everyone call you just when you can’t answer the phone? So instead of spending my day listening to people tell me that they love me, I spent my day on hold—listening to all manner of jazz that’s smoother than my shit on rapture day—just for the pleasure of talking to some duckfart-appraisal-school dropout like you who can no more remove a SneakyFeeTM than tie his own laces without getting shit in his shoes! So, mister I CAN HANDLE YOUR PROBLEM; THAT’S NO PROBLEM, can you handle any of those problems? because—praise the Lord!—Gus has found his way back up onto the roof, and was only so long in coming back because he stopped at the Walgreens for a fleece blanket (Gus, you say they were twofor-one?) two fleece blankets to lie down on so he can have the Goddamn comfort he deserves, what with his service to his nation and all, when he shoots you in the fucking head! And I’m on the other end of the call thinking, Shit! I can’t handle any of those problems. I say, Sir, despite my best hopes, I cannot HANDLE a single one of those new PROBLEMS either. And as you might expect, this triggers another burst of obscene aspersions against my truth-telling—such as, You tell more lies than . . . Fuck you!—and he tells me that even though he’s going to enjoy watching Gus shoot me more than a duck-fucker enjoys fucking ducks, he’s always going to regret not getting to slit my throat with that deli sword, and that this regret was one last lace-bowed shit-bouquet from me to 44