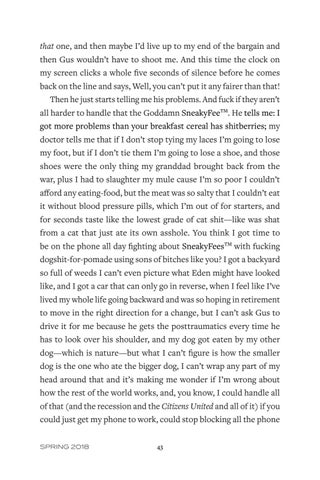 that one, and then maybe I’d live up to my end of the bargain and then Gus wouldn’t have to shoot me. And this time the clock on my screen clicks a whole five seconds of silence before he comes back on the line and says, Well, you can’t put it any fairer than that! Then he just starts telling me his problems. And fuck if they aren’t all harder to handle that the Goddamn SneakyFeeTM. He tells me: I got more problems than your breakfast cereal has shitberries; my doctor tells me that if I don’t stop tying my laces I’m going to lose my foot, but if I don’t tie them I’m going to lose a shoe, and those shoes were the only thing my granddad brought back from the war, plus I had to slaughter my mule cause I’m so poor I couldn’t afford any eating-food, but the meat was so salty that I couldn’t eat it without blood pressure pills, which I’m out of for starters, and for seconds taste like the lowest grade of cat shit—like was shat from a cat that just ate its own asshole. You think I got time to be on the phone all day fighting about SneakyFeesTM with fucking dogshit-for-pomade using sons of bitches like you? I got a backyard so full of weeds I can’t even picture what Eden might have looked like, and I got a car that can only go in reverse, when I feel like I’ve lived my whole life going backward and was so hoping in retirement to move in the right direction for a change, but I can’t ask Gus to drive it for me because he gets the posttraumatics every time he has to look over his shoulder, and my dog got eaten by my other dog—which is nature—but what I can’t figure is how the smaller dog is the one who ate the bigger dog, I can’t wrap any part of my head around that and it’s making me wonder if I’m wrong about how the rest of the world works, and, you know, I could handle all of that (and the recession and the Citizens United and all of it) if you could just get my phone to work, could stop blocking all the phone SPRING 2018