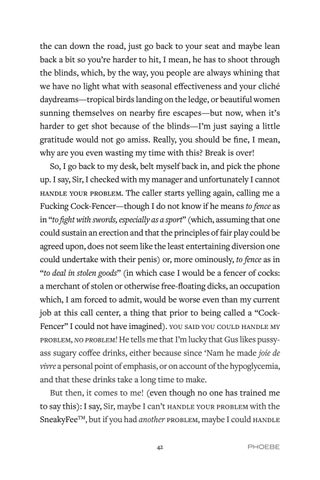 the can down the road, just go back to your seat and maybe lean back a bit so you’re harder to hit, I mean, he has to shoot through the blinds, which, by the way, you people are always whining that we have no light what with seasonal effectiveness and your cliché daydreams—tropical birds landing on the ledge, or beautiful women sunning themselves on nearby fire escapes—but now, when it’s harder to get shot because of the blinds—I’m just saying a little gratitude would not go amiss. Really, you should be fine, I mean, why are you even wasting my time with this? Break is over! So, I go back to my desk, belt myself back in, and pick the phone up. I say, Sir, I checked with my manager and unfortunately I cannot HANDLE YOUR PROBLEM. The caller starts yelling again, calling me a Fucking Cock-Fencer—though I do not know if he means to fence as in “to fight with swords, especially as a sport” (which, assuming that one could sustain an erection and that the principles of fair play could be agreed upon, does not seem like the least entertaining diversion one could undertake with their penis) or, more ominously, to fence as in “to deal in stolen goods” (in which case I would be a fencer of cocks: a merchant of stolen or otherwise free-floating dicks, an occupation which, I am forced to admit, would be worse even than my current job at this call center, a thing that prior to being called a “CockFencer” I could not have imagined). YOU SAID YOU COULD HANDLE MY PROBLEM, NO PROBLEM! He tells me that I’m lucky that Gus likes pussyass sugary coffee drinks, either because since ‘Nam he made joie de vivre a personal point of emphasis, or on account of the hypoglycemia, and that these drinks take a long time to make. But then, it comes to me! (even though no one has trained me to say this): I say, Sir, maybe I can’t HANDLE YOUR PROBLEM with the SneakyFeeTM, but if you had another PROBLEM, maybe I could HANDLE 42