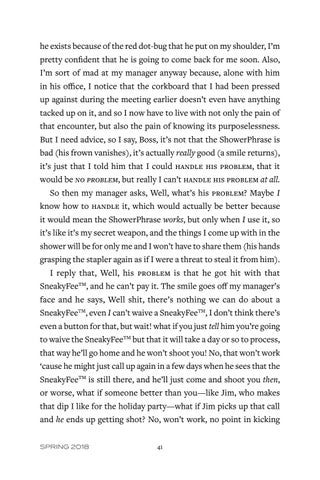 he exists because of the red dot-bug that he put on my shoulder, I’m pretty confident that he is going to come back for me soon. Also, I’m sort of mad at my manager anyway because, alone with him in his office, I notice that the corkboard that I had been pressed up against during the meeting earlier doesn’t even have anything tacked up on it, and so I now have to live with not only the pain of that encounter, but also the pain of knowing its purposelessness. But I need advice, so I say, Boss, it’s not that the ShowerPhrase is bad (his frown vanishes), it’s actually really good (a smile returns), it’s just that I told him that I could HANDLE HIS PROBLEM, that it would be NO PROBLEM, but really I can’t HANDLE HIS PROBLEM at all. So then my manager asks, Well, what’s his PROBLEM? Maybe I know how to HANDLE it, which would actually be better because it would mean the ShowerPhrase works, but only when I use it, so it’s like it’s my secret weapon, and the things I come up with in the shower will be for only me and I won’t have to share them (his hands grasping the stapler again as if I were a threat to steal it from him). I reply that, Well, his PROBLEM is that he got hit with that SneakyFeeTM, and he can’t pay it. The smile goes off my manager’s face and he says, Well shit, there’s nothing we can do about a SneakyFeeTM, even I can’t waive a SneakyFeeTM, I don’t think there’s even a button for that, but wait! what if you just tell him you’re going to waive the SneakyFeeTM but that it will take a day or so to process, that way he’ll go home and he won’t shoot you! No, that won’t work ‘cause he might just call up again in a few days when he sees that the SneakyFeeTM is still there, and he’ll just come and shoot you then, or worse, what if someone better than you—like Jim, who makes that dip I like for the holiday party—what if Jim picks up that call and he ends up getting shot? No, won’t work, no point in kicking SPRING 2018