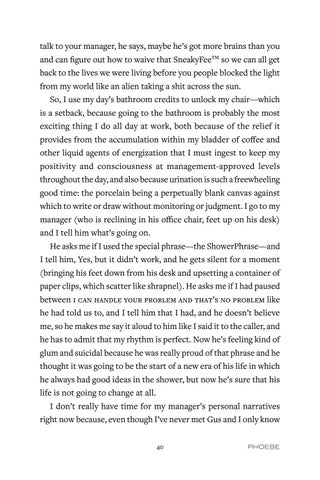 talk to your manager, he says, maybe he’s got more brains than you and can figure out how to waive that SneakyFeeTM so we can all get back to the lives we were living before you people blocked the light from my world like an alien taking a shit across the sun. So, I use my day’s bathroom credits to unlock my chair—which is a setback, because going to the bathroom is probably the most exciting thing I do all day at work, both because of the relief it provides from the accumulation within my bladder of coffee and other liquid agents of energization that I must ingest to keep my positivity and consciousness at management-approved levels throughout the day, and also because urination is such a freewheeling good time: the porcelain being a perpetually blank canvas against which to write or draw without monitoring or judgment. I go to my manager (who is reclining in his office chair, feet up on his desk) and I tell him what’s going on. He asks me if I used the special phrase—the ShowerPhrase—and I tell him, Yes, but it didn’t work, and he gets silent for a moment (bringing his feet down from his desk and upsetting a container of paper clips, which scatter like shrapnel). He asks me if I had paused between I CAN HANDLE YOUR PROBLEM and THAT’S NO PROBLEM like he had told us to, and I tell him that I had, and he doesn’t believe me, so he makes me say it aloud to him like I said it to the caller, and he has to admit that my rhythm is perfect. Now he’s feeling kind of glum and suicidal because he was really proud of that phrase and he thought it was going to be the start of a new era of his life in which he always had good ideas in the shower, but now he’s sure that his life is not going to change at all. I don’t really have time for my manager’s personal narratives right now because, even though I’ve never met Gus and I only know 40