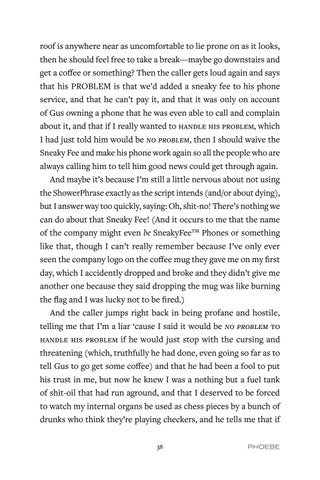 roof is anywhere near as uncomfortable to lie prone on as it looks, then he should feel free to take a break—maybe go downstairs and get a coffee or something? Then the caller gets loud again and says that his PROBLEM is that we’d added a sneaky fee to his phone service, and that he can’t pay it, and that it was only on account of Gus owning a phone that he was even able to call and complain about it, and that if I really wanted to HANDLE HIS PROBLEM, which I had just told him would be NO PROBLEM, then I should waive the Sneaky Fee and make his phone work again so all the people who are always calling him to tell him good news could get through again. And maybe it’s because I’m still a little nervous about not using the ShowerPhrase exactly as the script intends (and/or about dying), but I answer way too quickly, saying: Oh, shit-no! There’s nothing we can do about that Sneaky Fee! (And it occurs to me that the name of the company might even be SneakyFeeTM Phones or something like that, though I can’t really remember because I’ve only ever seen the company logo on the coffee mug they gave me on my first day, which I accidently dropped and broke and they didn’t give me another one because they said dropping the mug was like burning the flag and I was lucky not to be fired.) And the caller jumps right back in being profane and hostile, telling me that I’m a liar ‘cause I said it would be NO PROBLEM to HANDLE HIS PROBLEM if he would just stop with the cursing and threatening (which, truthfully he had done, even going so far as to tell Gus to go get some coffee) and that he had been a fool to put his trust in me, but now he knew I was a nothing but a fuel tank of shit-oil that had run aground, and that I deserved to be forced to watch my internal organs be used as chess pieces by a bunch of drunks who think they’re playing checkers, and he tells me that if 38