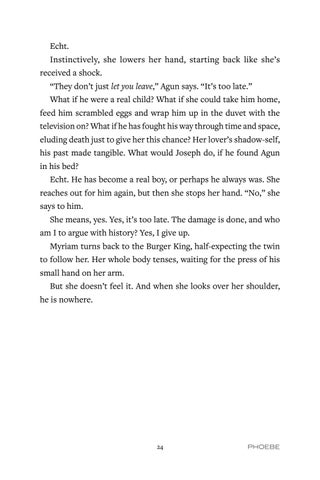 Echt. Instinctively, she lowers her hand, starting back like she’s received a shock. “They don’t just let you leave,” Agun says. “It’s too late.” What if he were a real child? What if she could take him home, feed him scrambled eggs and wrap him up in the duvet with the television on? What if he has fought his way through time and space, eluding death just to give her this chance? Her lover’s shadow-self, his past made tangible. What would Joseph do, if he found Agun in his bed? Echt. He has become a real boy, or perhaps he always was. She reaches out for him again, but then she stops her hand. “No,” she says to him. She means, yes. Yes, it’s too late. The damage is done, and who am I to argue with history? Yes, I give up. Myriam turns back to the Burger King, half-expecting the twin to follow her. Her whole body tenses, waiting for the press of his small hand on her arm. But she doesn’t feel it. And when she looks over her shoulder, he is nowhere.