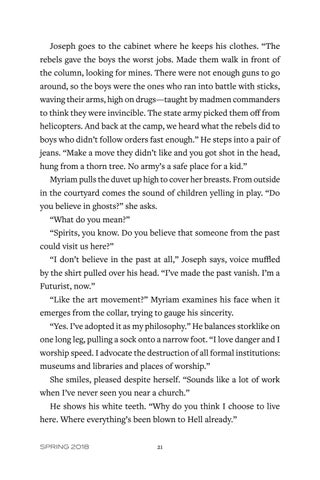 Joseph goes to the cabinet where he keeps his clothes. “The rebels gave the boys the worst jobs. Made them walk in front of the column, looking for mines. There were not enough guns to go around, so the boys were the ones who ran into battle with sticks, waving their arms, high on drugs—taught by madmen commanders to think they were invincible. The state army picked them off from helicopters. And back at the camp, we heard what the rebels did to boys who didn’t follow orders fast enough.” He steps into a pair of jeans. “Make a move they didn’t like and you got shot in the head, hung from a thorn tree. No army’s a safe place for a kid.” Myriam pulls the duvet up high to cover her breasts. From outside in the courtyard comes the sound of children yelling in play. “Do you believe in ghosts?” she asks. “What do you mean?” “Spirits, you know. Do you believe that someone from the past could visit us here?” “I don’t believe in the past at all,” Joseph says, voice muffled by the shirt pulled over his head. “I’ve made the past vanish. I’m a Futurist, now.” “Like the art movement?” Myriam examines his face when it emerges from the collar, trying to gauge his sincerity. “Yes. I’ve adopted it as my philosophy.” He balances storklike on one long leg, pulling a sock onto a narrow foot. “I love danger and I worship speed. I advocate the destruction of all formal institutions: museums and libraries and places of worship.” She smiles, pleased despite herself. “Sounds like a lot of work when I’ve never seen you near a church.” He shows his white teeth. “Why do you think I choose to live here. Where everything’s been blown to Hell already.” SPRING 2018