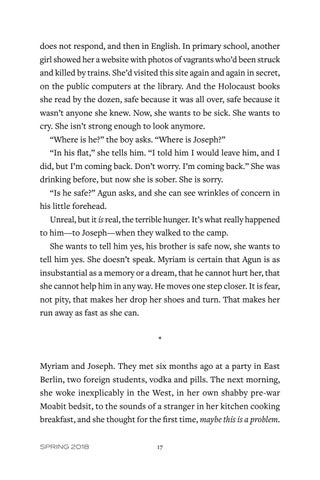 does not respond, and then in English. In primary school, another girl showed her a website with photos of vagrants who’d been struck and killed by trains. She’d visited this site again and again in secret, on the public computers at the library. And the Holocaust books she read by the dozen, safe because it was all over, safe because it wasn’t anyone she knew. Now, she wants to be sick. She wants to cry. She isn’t strong enough to look anymore. “Where is he?” the boy asks. “Where is Joseph?” “In his flat,” she tells him. “I told him I would leave him, and I did, but I’m coming back. Don’t worry. I’m coming back.” She was drinking before, but now she is sober. She is sorry. “Is he safe?” Agun asks, and she can see wrinkles of concern in his little forehead. Unreal, but it is real, the terrible hunger. It’s what really happened to him—to Joseph—when they walked to the camp. She wants to tell him yes, his brother is safe now, she wants to tell him yes. She doesn’t speak. Myriam is certain that Agun is as insubstantial as a memory or a dream, that he cannot hurt her, that she cannot help him in any way. He moves one step closer. It is fear, not pity, that makes her drop her shoes and turn. That makes her run away as fast as she can. * Myriam and Joseph. They met six months ago at a party in East Berlin, two foreign students, vodka and pills. The next morning, she woke inexplicably in the West, in her own shabby pre-war Moabit bedsit, to the sounds of a stranger in her kitchen cooking breakfast, and she thought for the first time, maybe this is a problem. SPRING 2018