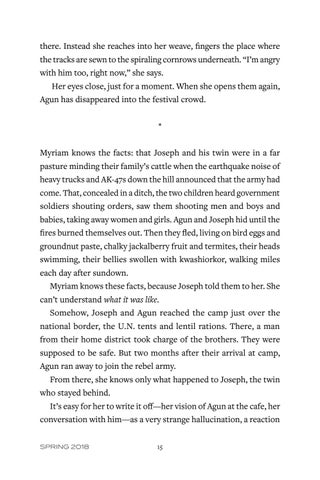 there. Instead she reaches into her weave, fingers the place where the tracks are sewn to the spiraling cornrows underneath. “I’m angry with him too, right now,” she says. Her eyes close, just for a moment. When she opens them again, Agun has disappeared into the festival crowd. * Myriam knows the facts: that Joseph and his twin were in a far pasture minding their family’s cattle when the earthquake noise of heavy trucks and AK-47s down the hill announced that the army had come. That, concealed in a ditch, the two children heard government soldiers shouting orders, saw them shooting men and boys and babies, taking away women and girls. Agun and Joseph hid until the fires burned themselves out. Then they fled, living on bird eggs and groundnut paste, chalky jackalberry fruit and termites, their heads swimming, their bellies swollen with kwashiorkor, walking miles each day after sundown. Myriam knows these facts, because Joseph told them to her. She can’t understand what it was like. Somehow, Joseph and Agun reached the camp just over the national border, the U.N. tents and lentil rations. There, a man from their home district took charge of the brothers. They were supposed to be safe. But two months after their arrival at camp, Agun ran away to join the rebel army. From there, she knows only what happened to Joseph, the twin who stayed behind. It’s easy for her to write it off—her vision of Agun at the cafe, her conversation with him—as a very strange hallucination, a reaction SPRING 2018