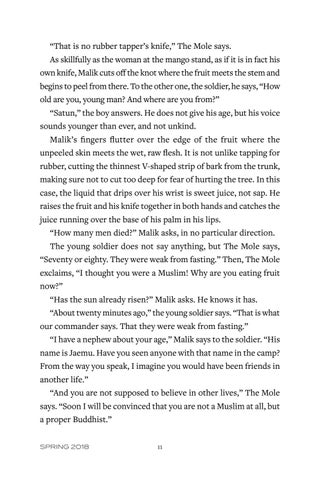 “That is no rubber tapper’s knife,” The Mole says. As skillfully as the woman at the mango stand, as if it is in fact his own knife, Malik cuts off the knot where the fruit meets the stem and begins to peel from there. To the other one, the soldier, he says, “How old are you, young man? And where are you from?” “Satun,” the boy answers. He does not give his age, but his voice sounds younger than ever, and not unkind. Malik’s fingers flutter over the edge of the fruit where the unpeeled skin meets the wet, raw flesh. It is not unlike tapping for rubber, cutting the thinnest V-shaped strip of bark from the trunk, making sure not to cut too deep for fear of hurting the tree. In this case, the liquid that drips over his wrist is sweet juice, not sap. He raises the fruit and his knife together in both hands and catches the juice running over the base of his palm in his lips. “How many men died?” Malik asks, in no particular direction. The young soldier does not say anything, but The Mole says, “Seventy or eighty. They were weak from fasting.” Then, The Mole exclaims, “I thought you were a Muslim! Why are you eating fruit now?” “Has the sun already risen?” Malik asks. He knows it has. “About twenty minutes ago,” the young soldier says. “That is what our commander says. That they were weak from fasting.” “I have a nephew about your age,” Malik says to the soldier. “His name is Jaemu. Have you seen anyone with that name in the camp? From the way you speak, I imagine you would have been friends in another life.” “And you are not supposed to believe in other lives,” The Mole says. “Soon I will be convinced that you are not a Muslim at all, but a proper Buddhist.” SPRING 2018