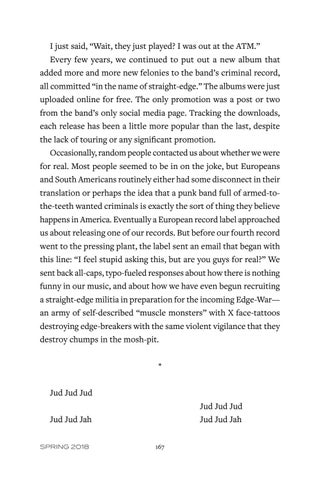 I just said, “Wait, they just played? I was out at the ATM.” Every few years, we continued to put out a new album that added more and more new felonies to the band’s criminal record, all committed “in the name of straight-edge.” The albums were just uploaded online for free. The only promotion was a post or two from the band’s only social media page. Tracking the downloads, each release has been a little more popular than the last, despite the lack of touring or any significant promotion. Occasionally, random people contacted us about whether we were for real. Most people seemed to be in on the joke, but Europeans and South Americans routinely either had some disconnect in their translation or perhaps the idea that a punk band full of armed-tothe-teeth wanted criminals is exactly the sort of thing they believe happens in America. Eventually a European record label approached us about releasing one of our records. But before our fourth record went to the pressing plant, the label sent an email that began with this line: “I feel stupid asking this, but are you guys for real?” We sent back all-caps, typo-fueled responses about how there is nothing funny in our music, and about how we have even begun recruiting a straight-edge militia in preparation for the incoming Edge-War— an army of self-described “muscle monsters” with X face-tattoos destroying edge-breakers with the same violent vigilance that they destroy chumps in the mosh-pit. * Jud Jud Jud Jud Jud Jud Jud Jud Jah