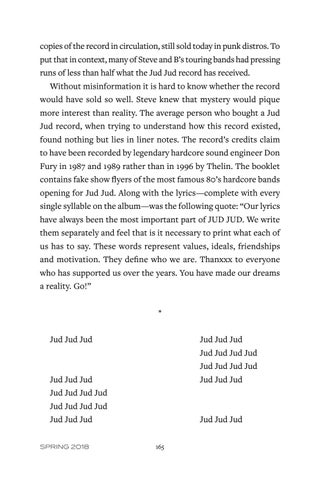 copies of the record in circulation, still sold today in punk distros. To put that in context, many of Steve and B’s touring bands had pressing runs of less than half what the Jud Jud record has received. Without misinformation it is hard to know whether the record would have sold so well. Steve knew that mystery would pique more interest than reality. The average person who bought a Jud Jud record, when trying to understand how this record existed, found nothing but lies in liner notes. The record’s credits claim to have been recorded by legendary hardcore sound engineer Don Fury in 1987 and 1989 rather than in 1996 by Thelin. The booklet contains fake show flyers of the most famous 80’s hardcore bands opening for Jud Jud. Along with the lyrics—complete with every single syllable on the album—was the following quote: “Our lyrics have always been the most important part of JUD JUD. We write them separately and feel that is it necessary to print what each of us has to say. These words represent values, ideals, friendships and motivation. They define who we are. Thanxxx to everyone who has supported us over the years. You have made our dreams a reality. Go!” * Jud Jud Jud