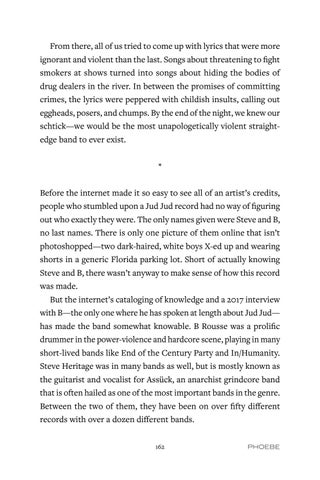 From there, all of us tried to come up with lyrics that were more ignorant and violent than the last. Songs about threatening to fight smokers at shows turned into songs about hiding the bodies of drug dealers in the river. In between the promises of committing crimes, the lyrics were peppered with childish insults, calling out eggheads, posers, and chumps. By the end of the night, we knew our schtick—we would be the most unapologetically violent straightedge band to ever exist. * Before the internet made it so easy to see all of an artist’s credits, people who stumbled upon a Jud Jud record had no way of figuring out who exactly they were. The only names given were Steve and B, no last names. There is only one picture of them online that isn’t photoshopped—two dark-haired, white boys X-ed up and wearing shorts in a generic Florida parking lot. Short of actually knowing Steve and B, there wasn’t anyway to make sense of how this record was made. But the internet’s cataloging of knowledge and a 2017 interview with B—the only one where he has spoken at length about Jud Jud— has made the band somewhat knowable. B Rousse was a prolific drummer in the power-violence and hardcore scene, playing in many short-lived bands like End of the Century Party and In/Humanity. Steve Heritage was in many bands as well, but is mostly known as the guitarist and vocalist for Assück, an anarchist grindcore band that is often hailed as one of the most important bands in the genre. Between the two of them, they have been on over fifty different records with over a dozen different bands. 162