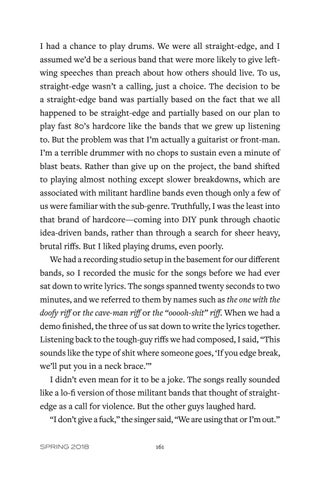 I had a chance to play drums. We were all straight-edge, and I assumed we’d be a serious band that were more likely to give leftwing speeches than preach about how others should live. To us, straight-edge wasn’t a calling, just a choice. The decision to be a straight-edge band was partially based on the fact that we all happened to be straight-edge and partially based on our plan to play fast 80’s hardcore like the bands that we grew up listening to. But the problem was that I’m actually a guitarist or front-man. I’m a terrible drummer with no chops to sustain even a minute of blast beats. Rather than give up on the project, the band shifted to playing almost nothing except slower breakdowns, which are associated with militant hardline bands even though only a few of us were familiar with the sub-genre. Truthfully, I was the least into that brand of hardcore—coming into DIY punk through chaotic idea-driven bands, rather than through a search for sheer heavy, brutal riffs. But I liked playing drums, even poorly. We had a recording studio setup in the basement for our different bands, so I recorded the music for the songs before we had ever sat down to write lyrics. The songs spanned twenty seconds to two minutes, and we referred to them by names such as the one with the doofy riff or the cave-man riff or the “ooooh-shit” riff. When we had a demo finished, the three of us sat down to write the lyrics together. Listening back to the tough-guy riffs we had composed, I said, “This sounds like the type of shit where someone goes, ‘If you edge break, we’ll put you in a neck brace.’” I didn’t even mean for it to be a joke. The songs really sounded like a lo-fi version of those militant bands that thought of straightedge as a call for violence. But the other guys laughed hard. “I don’t give a fuck,” the singer said, “We are using that or I’m out.” SPRING 2018