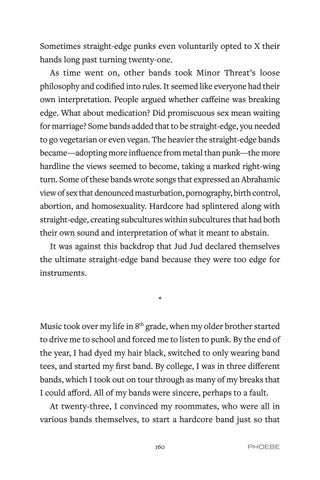 Sometimes straight-edge punks even voluntarily opted to X their hands long past turning twenty-one. As time went on, other bands took Minor Threat’s loose philosophy and codified into rules. It seemed like everyone had their own interpretation. People argued whether caffeine was breaking edge. What about medication? Did promiscuous sex mean waiting for marriage? Some bands added that to be straight-edge, you needed to go vegetarian or even vegan. The heavier the straight-edge bands became—adopting more influence from metal than punk—the more hardline the views seemed to become, taking a marked right-wing turn. Some of these bands wrote songs that expressed an Abrahamic view of sex that denounced masturbation, pornography, birth control, abortion, and homosexuality. Hardcore had splintered along with straight-edge, creating subcultures within subcultures that had both their own sound and interpretation of what it meant to abstain. It was against this backdrop that Jud Jud declared themselves the ultimate straight-edge band because they were too edge for instruments. * Music took over my life in 8th grade, when my older brother started to drive me to school and forced me to listen to punk. By the end of the year, I had dyed my hair black, switched to only wearing band tees, and started my first band. By college, I was in three different bands, which I took out on tour through as many of my breaks that I could afford. All of my bands were sincere, perhaps to a fault. At twenty-three, I convinced my roommates, who were all in various bands themselves, to start a hardcore band just so that 160