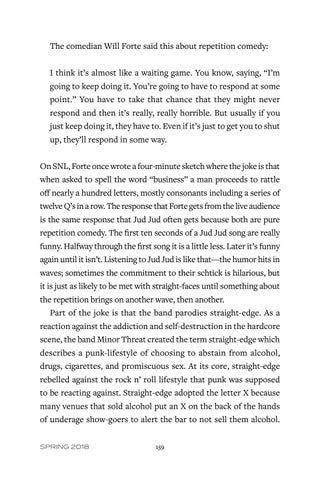 The comedian Will Forte said this about repetition comedy: I think it’s almost like a waiting game. You know, saying, “I’m going to keep doing it. You’re going to have to respond at some point.” You have to take that chance that they might never respond and then it’s really, really horrible. But usually if you just keep doing it, they have to. Even if it’s just to get you to shut up, they’ll respond in some way. On SNL, Forte once wrote a four-minute sketch where the joke is that when asked to spell the word “business” a man proceeds to rattle off nearly a hundred letters, mostly consonants including a series of twelve Q’s in a row. The response that Forte gets from the live audience is the same response that Jud Jud often gets because both are pure repetition comedy. The first ten seconds of a Jud Jud song are really funny. Halfway through the first song it is a little less. Later it’s funny again until it isn’t. Listening to Jud Jud is like that—the humor hits in waves; sometimes the commitment to their schtick is hilarious, but it is just as likely to be met with straight-faces until something about the repetition brings on another wave, then another. Part of the joke is that the band parodies straight-edge. As a reaction against the addiction and self-destruction in the hardcore scene, the band Minor Threat created the term straight-edge which describes a punk-lifestyle of choosing to abstain from alcohol, drugs, cigarettes, and promiscuous sex. At its core, straight-edge rebelled against the rock n’ roll lifestyle that punk was supposed to be reacting against. Straight-edge adopted the letter X because many venues that sold alcohol put an X on the back of the hands of underage show-goers to alert the bar to not sell them alcohol. SPRING 2018