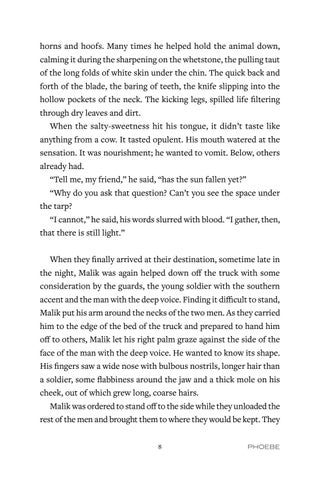 horns and hoofs. Many times he helped hold the animal down, calming it during the sharpening on the whetstone, the pulling taut of the long folds of white skin under the chin. The quick back and forth of the blade, the baring of teeth, the knife slipping into the hollow pockets of the neck. The kicking legs, spilled life filtering through dry leaves and dirt. When the salty-sweetness hit his tongue, it didn’t taste like anything from a cow. It tasted opulent. His mouth watered at the sensation. It was nourishment; he wanted to vomit. Below, others already had. “Tell me, my friend,” he said, “has the sun fallen yet?” “Why do you ask that question? Can’t you see the space under the tarp? “I cannot,” he said, his words slurred with blood. “I gather, then, that there is still light.” When they finally arrived at their destination, sometime late in the night, Malik was again helped down off the truck with some consideration by the guards, the young soldier with the southern accent and the man with the deep voice. Finding it difficult to stand, Malik put his arm around the necks of the two men. As they carried him to the edge of the bed of the truck and prepared to hand him off to others, Malik let his right palm graze against the side of the face of the man with the deep voice. He wanted to know its shape. His fingers saw a wide nose with bulbous nostrils, longer hair than a soldier, some flabbiness around the jaw and a thick mole on his cheek, out of which grew long, coarse hairs. Malik was ordered to stand off to the side while they unloaded the rest of the men and brought them to where they would be kept. They 8