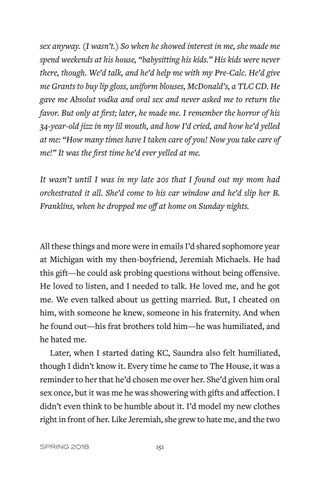 sex anyway. (I wasn’t.) So when he showed interest in me, she made me spend weekends at his house, “babysitting his kids.” His kids were never there, though. We’d talk, and he’d help me with my Pre-Calc. He’d give me Grants to buy lip gloss, uniform blouses, McDonald’s, a TLC CD. He gave me Absolut vodka and oral sex and never asked me to return the favor. But only at first; later, he made me. I remember the horror of his 34-year-old jizz in my lil mouth, and how I’d cried, and how he’d yelled at me: “How many times have I taken care of you! Now you take care of me!” It was the first time he’d ever yelled at me. It wasn’t until I was in my late 20s that I found out my mom had orchestrated it all. She’d come to his car window and he’d slip her B. Franklins, when he dropped me off at home on Sunday nights.

All these things and more were in emails I’d shared sophomore year at Michigan with my then-boyfriend, Jeremiah Michaels. He had this gift—he could ask probing questions without being offensive. He loved to listen, and I needed to talk. He loved me, and he got me. We even talked about us getting married. But, I cheated on him, with someone he knew, someone in his fraternity. And when he found out—his frat brothers told him—he was humiliated, and he hated me. Later, when I started dating KC, Saundra also felt humiliated, though I didn’t know it. Every time he came to The House, it was a reminder to her that he’d chosen me over her. She’d given him oral sex once, but it was me he was showering with gifts and affection. I didn’t even think to be humble about it. I’d model my new clothes right in front of her. Like Jeremiah, she grew to hate me, and the two SPRING 2018