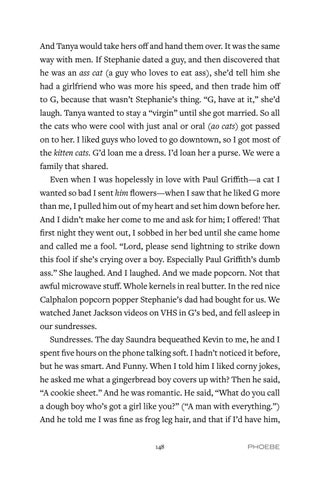 And Tanya would take hers off and hand them over. It was the same way with men. If Stephanie dated a guy, and then discovered that he was an ass cat (a guy who loves to eat ass), she’d tell him she had a girlfriend who was more his speed, and then trade him off to G, because that wasn’t Stephanie’s thing. “G, have at it,” she’d laugh. Tanya wanted to stay a “virgin” until she got married. So all the cats who were cool with just anal or oral (ao cats) got passed on to her. I liked guys who loved to go downtown, so I got most of the kitten cats. G’d loan me a dress. I’d loan her a purse. We were a family that shared. Even when I was hopelessly in love with Paul Griffith—a cat I wanted so bad I sent him flowers—when I saw that he liked G more than me, I pulled him out of my heart and set him down before her. And I didn’t make her come to me and ask for him; I offered! That first night they went out, I sobbed in her bed until she came home and called me a fool. “Lord, please send lightning to strike down this fool if she’s crying over a boy. Especially Paul Griffith’s dumb ass.” She laughed. And I laughed. And we made popcorn. Not that awful microwave stuff. Whole kernels in real butter. In the red nice Calphalon popcorn popper Stephanie’s dad had bought for us. We watched Janet Jackson videos on VHS in G’s bed, and fell asleep in our sundresses. Sundresses. The day Saundra bequeathed Kevin to me, he and I spent five hours on the phone talking soft. I hadn’t noticed it before, but he was smart. And Funny. When I told him I liked corny jokes, he asked me what a gingerbread boy covers up with? Then he said, “A cookie sheet.” And he was romantic. He said, “What do you call a dough boy who’s got a girl like you?” (“A man with everything.”) And he told me I was fine as frog leg hair, and that if I’d have him, 148