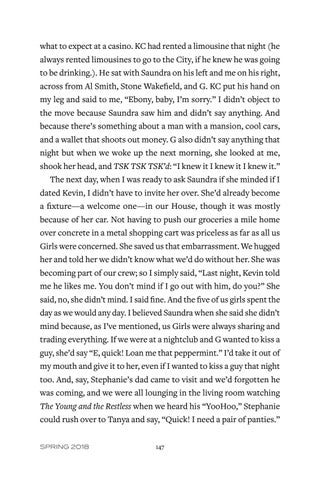 what to expect at a casino. KC had rented a limousine that night (he always rented limousines to go to the City, if he knew he was going to be drinking.). He sat with Saundra on his left and me on his right, across from Al Smith, Stone Wakefield, and G. KC put his hand on my leg and said to me, “Ebony, baby, I’m sorry.” I didn’t object to the move because Saundra saw him and didn’t say anything. And because there’s something about a man with a mansion, cool cars, and a wallet that shoots out money. G also didn’t say anything that night but when we woke up the next morning, she looked at me, shook her head, and TSK TSK TSK’d: “I knew it I knew it I knew it.” The next day, when I was ready to ask Saundra if she minded if I dated Kevin, I didn’t have to invite her over. She’d already become a fixture—a welcome one—in our House, though it was mostly because of her car. Not having to push our groceries a mile home over concrete in a metal shopping cart was priceless as far as all us Girls were concerned. She saved us that embarrassment. We hugged her and told her we didn’t know what we’d do without her. She was becoming part of our crew; so I simply said, “Last night, Kevin told me he likes me. You don’t mind if I go out with him, do you?” She said, no, she didn’t mind. I said fine. And the five of us girls spent the day as we would any day. I believed Saundra when she said she didn’t mind because, as I’ve mentioned, us Girls were always sharing and trading everything. If we were at a nightclub and G wanted to kiss a guy, she’d say “E, quick! Loan me that peppermint.” I’d take it out of my mouth and give it to her, even if I wanted to kiss a guy that night too. And, say, Stephanie’s dad came to visit and we’d forgotten he was coming, and we were all lounging in the living room watching The Young and the Restless when we heard his “YooHoo,” Stephanie could rush over to Tanya and say, “Quick! I need a pair of panties.” SPRING 2018