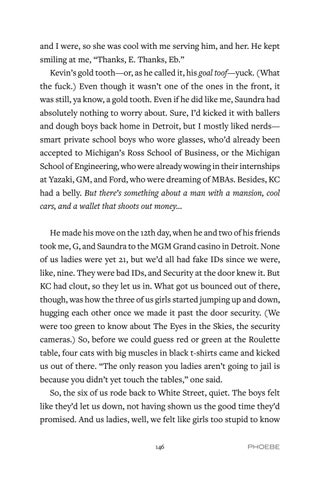 and I were, so she was cool with me serving him, and her. He kept smiling at me, “Thanks, E. Thanks, Eb.” Kevin’s gold tooth—or, as he called it, his goal toof—yuck. (What the fuck.) Even though it wasn’t one of the ones in the front, it was still, ya know, a gold tooth. Even if he did like me, Saundra had absolutely nothing to worry about. Sure, I’d kicked it with ballers and dough boys back home in Detroit, but I mostly liked nerds— smart private school boys who wore glasses, who’d already been accepted to Michigan’s Ross School of Business, or the Michigan School of Engineering, who were already wowing in their internships at Yazaki, GM, and Ford, who were dreaming of MBAs. Besides, KC had a belly. But there’s something about a man with a mansion, cool cars, and a wallet that shoots out money… He made his move on the 12th day, when he and two of his friends took me, G, and Saundra to the MGM Grand casino in Detroit. None of us ladies were yet 21, but we’d all had fake IDs since we were, like, nine. They were bad IDs, and Security at the door knew it. But KC had clout, so they let us in. What got us bounced out of there, though, was how the three of us girls started jumping up and down, hugging each other once we made it past the door security. (We were too green to know about The Eyes in the Skies, the security cameras.) So, before we could guess red or green at the Roulette table, four cats with big muscles in black t-shirts came and kicked us out of there. “The only reason you ladies aren’t going to jail is because you didn’t yet touch the tables,” one said. So, the six of us rode back to White Street, quiet. The boys felt like they’d let us down, not having shown us the good time they’d promised. And us ladies, well, we felt like girls too stupid to know 146