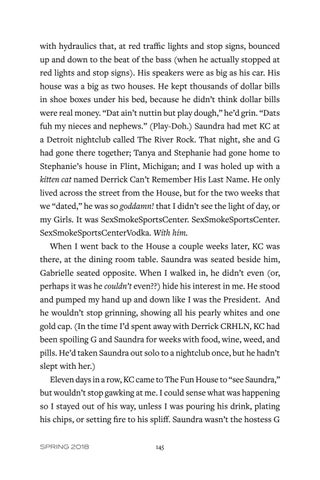 with hydraulics that, at red traffic lights and stop signs, bounced up and down to the beat of the bass (when he actually stopped at red lights and stop signs). His speakers were as big as his car. His house was a big as two houses. He kept thousands of dollar bills in shoe boxes under his bed, because he didn’t think dollar bills were real money. “Dat ain’t nuttin but play dough,” he’d grin. “Dats fuh my nieces and nephews.” (Play-Doh.) Saundra had met KC at a Detroit nightclub called The River Rock. That night, she and G had gone there together; Tanya and Stephanie had gone home to Stephanie’s house in Flint, Michigan; and I was holed up with a kitten cat named Derrick Can’t Remember His Last Name. He only lived across the street from the House, but for the two weeks that we “dated,” he was so goddamn! that I didn’t see the light of day, or my Girls. It was SexSmokeSportsCenter. SexSmokeSportsCenter. SexSmokeSportsCenterVodka. With him. When I went back to the House a couple weeks later, KC was there, at the dining room table. Saundra was seated beside him, Gabrielle seated opposite. When I walked in, he didn’t even (or, perhaps it was he couldn’t even??) hide his interest in me. He stood and pumped my hand up and down like I was the President. And he wouldn’t stop grinning, showing all his pearly whites and one gold cap. (In the time I’d spent away with Derrick CRHLN, KC had been spoiling G and Saundra for weeks with food, wine, weed, and pills. He’d taken Saundra out solo to a nightclub once, but he hadn’t slept with her.) Eleven days in a row, KC came to The Fun House to “see Saundra,” but wouldn’t stop gawking at me. I could sense what was happening so I stayed out of his way, unless I was pouring his drink, plating his chips, or setting fire to his spliff. Saundra wasn’t the hostess G SPRING 2018