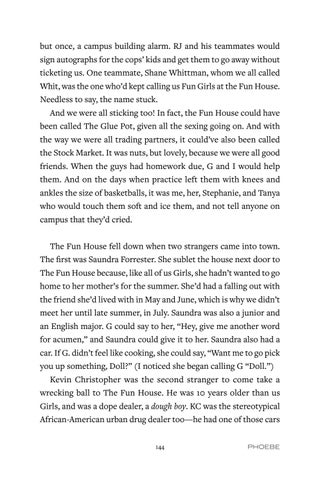 but once, a campus building alarm. RJ and his teammates would sign autographs for the cops’ kids and get them to go away without ticketing us. One teammate, Shane Whittman, whom we all called Whit, was the one who’d kept calling us Fun Girls at the Fun House. Needless to say, the name stuck. And we were all sticking too! In fact, the Fun House could have been called The Glue Pot, given all the sexing going on. And with the way we were all trading partners, it could’ve also been called the Stock Market. It was nuts, but lovely, because we were all good friends. When the guys had homework due, G and I would help them. And on the days when practice left them with knees and ankles the size of basketballs, it was me, her, Stephanie, and Tanya who would touch them soft and ice them, and not tell anyone on campus that they’d cried. The Fun House fell down when two strangers came into town. The first was Saundra Forrester. She sublet the house next door to The Fun House because, like all of us Girls, she hadn’t wanted to go home to her mother’s for the summer. She’d had a falling out with the friend she’d lived with in May and June, which is why we didn’t meet her until late summer, in July. Saundra was also a junior and an English major. G could say to her, “Hey, give me another word for acumen,” and Saundra could give it to her. Saundra also had a car. If G. didn’t feel like cooking, she could say, “Want me to go pick you up something, Doll?” (I noticed she began calling G “Doll.”) Kevin Christopher was the second stranger to come take a wrecking ball to The Fun House. He was 10 years older than us Girls, and was a dope dealer, a dough boy. KC was the stereotypical African-American urban drug dealer too—he had one of those cars 144