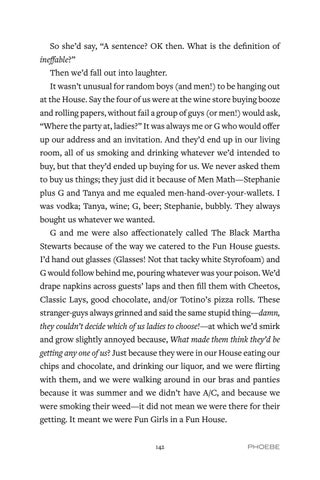 So she’d say, “A sentence? OK then. What is the definition of ineffable?” Then we’d fall out into laughter. It wasn’t unusual for random boys (and men!) to be hanging out at the House. Say the four of us were at the wine store buying booze and rolling papers, without fail a group of guys (or men!) would ask, “Where the party at, ladies?” It was always me or G who would offer up our address and an invitation. And they’d end up in our living room, all of us smoking and drinking whatever we’d intended to buy, but that they’d ended up buying for us. We never asked them to buy us things; they just did it because of Men Math—Stephanie plus G and Tanya and me equaled men-hand-over-your-wallets. I was vodka; Tanya, wine; G, beer; Stephanie, bubbly. They always bought us whatever we wanted. G and me were also affectionately called The Black Martha Stewarts because of the way we catered to the Fun House guests. I’d hand out glasses (Glasses! Not that tacky white Styrofoam) and G would follow behind me, pouring whatever was your poison. We’d drape napkins across guests’ laps and then fill them with Cheetos, Classic Lays, good chocolate, and/or Totino’s pizza rolls. These stranger-guys always grinned and said the same stupid thing—damn, they couldn’t decide which of us ladies to choose!—at which we’d smirk and grow slightly annoyed because, What made them think they’d be getting any one of us? Just because they were in our House eating our chips and chocolate, and drinking our liquor, and we were flirting with them, and we were walking around in our bras and panties because it was summer and we didn’t have A/C, and because we were smoking their weed—it did not mean we were there for their getting. It meant we were Fun Girls in a Fun House. 142